SKATE DANCE DIAGRAMS AND TOOLS
Polka
Click to go to Alphabetical list
Polka Origins:
sources: Wikipedia, Central Home
Bohemian historians believe that the polka was invented by a peasant girl (Anna Slezak, in Labska Tynice in 1834) one Sunday for her amusement. The Bohemian region is now a part of the Czech Republic including the city of Prague. It was composed to a folk song "Strycek Nimra Koupil Simla (Uncle Nimra brought a white horse)." Anna called the step "Madera" because of its quickness and liveliness. The Polka is a vivacious couple dance.
The dance was first introduced into the ballrooms of Prague in 1835. The name of the dance (pulka) is Czech for "half-step", referring to the rapid shift from one foot to the other.

Music:
sources: Wikipedia
Polka was a basic pattern of hop-step-close-step; a lively Bohemian dance tune in 2/4 time (in duple time). In principle, the Polka written in the 1800's has a 4-theme structure; themes 1A and 1B as well as a 'Trio' section of a further 2 themes. The 'Trio' usually has an 'Intrada' to form a break between the two sections.
The quintessential Polka tune is the Rosamunde, later arrangements are known as the Beer Barrel Polka or Roll Out the Barrel, with the 'om pa' accents characteristic of the rhythm. Also see Identifying Musical Rhythms.
Score of the 'chorus'. Red notes are the beats a skater would use. The annotation shows what "2/4 time counted 1-2-3-4" means in some dance notes. When notes are 'tied' together, it means the first note is held through the second, and the second isn't a beat that can be heard. 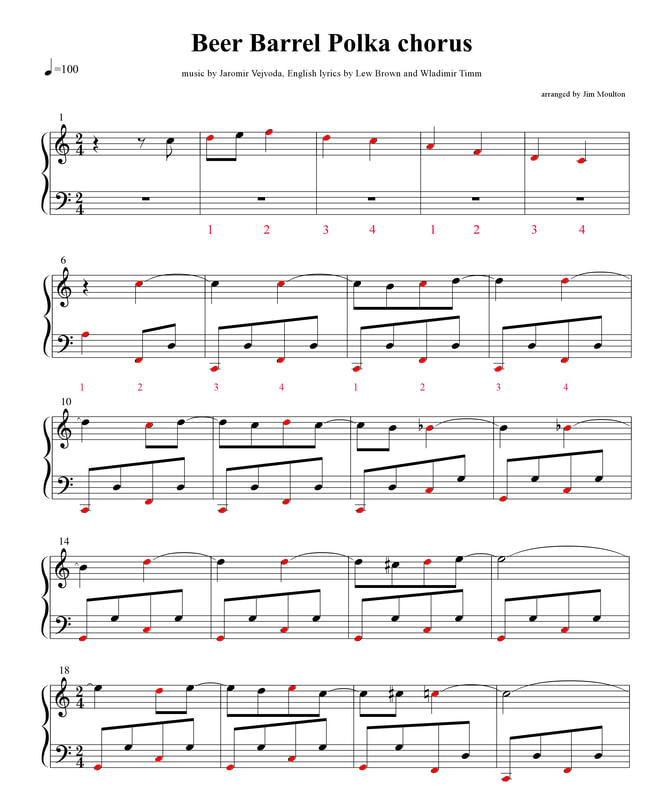