March music was expressly written for marching to, most commonly performed by a military band. Marches, which are played at paces with multiples of normal heartbeat, typically 60 or 120 BPM, can have a hypnotic effect on the marching soldiers, rendering them into a trance. This effect was widely known already in the 1500's, and was employed to lead the soldiers in closed ranks against the enemy fire in wars during the 1500's and 1600's.
Marches weren't notated or written down until the late 1500's; until then, time was generally kept by percussion alone, often with improvised fife embellishment. With the extensive development of brass instruments, especially in the 1800's, marches became widely popular and were often elaborately orchestrated. Composers such as Wolfgang Amadeus Mozart, Ludwig van Beethoven, and Gustav Mahler wrote marches, often incorporating them into their operas, sonatas, or symphonies. The later popularity of John Philip Sousa's band marches was unmatched.
Marches are widely adopted and varied throughout the world, each region or county having its own style.

music:
Most importantly, a march consists of a strong and steady percussive beat, reminiscent of military field drums.
Marches can be written in any time signature, but the most common time signatures are 4/4 or 2/2, and 6/8. In 6/8 time, groups of 3 notes are composed to give 2 heavy accents per bar or, a dotted 1/4 note followed by an 1/8 note (twice each measure). Some modern marches are being written in 1/2 or 2/4.
The form of a march typically consists of 16 to 32 measures in length with multiple repeats until a new section.
Marches frequently change keys once, and occasionally returning to the original key. Marches frequently have counter-melodies introduced during the repeat of a main melody, and have a penultimate dogfight strain in which two groups of instruments (high/low, woodwind/brass, etc.) alternate in a statement/response format.

Kilian origins
sources: skatelogforum
The was first performed on skates in 1909, in Vienna, at the Englemann ice rink, apparently the worlds oldest outdoor artificial ice rink during the year the rink opened. There are many guesses (some fanciful) as to the origin of the name. One is that the first skaters may have been named Kilian, a common one at the time in that area. In Scotland, the name given to the ancient custom at weddings of dancing on the grass? Saint Kilian, an Irish missionary who objected to certain dancing? A Doctor Gustvan Killian who described in 1909, the incisions made in the throat for a tracheotomy?
Even the spelling of 'Killian' is obscured in history.  The traditional Irish spelling of Cillian is still quite popular in both Ireland and Northern Ireland, but the Irish also use Kilian with a “K”. Kilian with one “L” is used with some frequency in Austria and France today, but Killian with two “L”s is preferred among English speakers. However, skaters being skaters, have over time adopted the spelling with one "L".
Besides the name of a difficult skate dance, Kilian is also the name of one of the most basic partner positions in skate dance - lady to the right, partners side by side, left hands together held in front, right hands on ladies right-side waist. See Team Dance Positions. 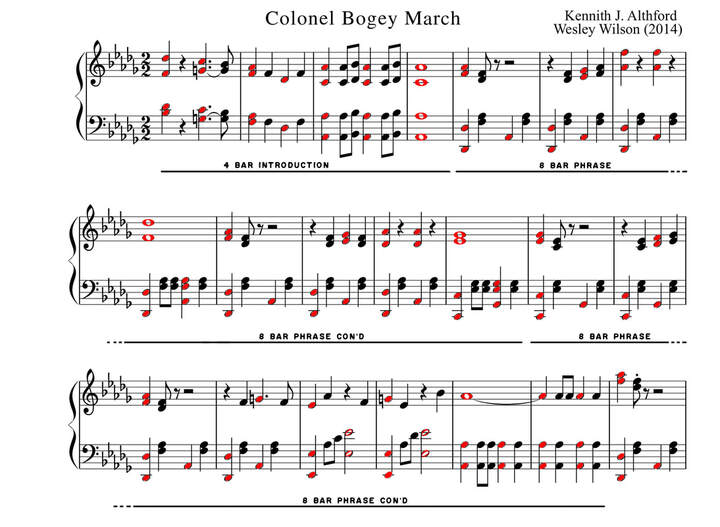 Paso Doble origins
sources: Wikipedia , Swingstreet
Paso Doble, (meaning double-step in Spanish) is based in folk Gypsy and Flamenco Spanish dance of the 1500's, where it is still part of the repertoire. Its origin dates back to a French military march with the name "Paso Redoble." This was a fast paced march, which is carried through into the dance. During the 1700's it was incorporated into comedies and was adopted as a regulatory step for the Spanish infantry, with a special feature that allows the troops to take the regular (fast) step: 120 steps per minute. The music was introduced in bullfights during the 1800's. It is played during the bullfighters' entrance to the ring (paseo) or during the passes (faena) just before the kill. Famous bullfighters have been honoured with pasodoble tunes named after them. Other tunes have been inspired by patriotic motifs or local characters. Both choreographed competitive and the 'lead' social forms are danced today throughout the world.

Music:
Paso Doble music is based on the French infantry march, the 'Pas redouble'.  It is done in 2/4 time, in 'duple metre', where each measure is divided into two beats. Once you have heard "España Cañi" or "Maleguena", you'll never mistake hearing a Paso Doble tune! Paso Doble is a style of March music and it appears the use of triplets is a way to implement the distinctive style.
España cañí (aka Spanish Gypsy Dance) was written around 1923 by Pascual Marquina Narro (1873-1948). metronome at 100 BPM, 2/4 time, note frequent use of triplet notes on the unaccented off beat. Phrases are 4 bars, repeated twice, for a total of 8 bars.
Sheet music for this arrangement at musescore 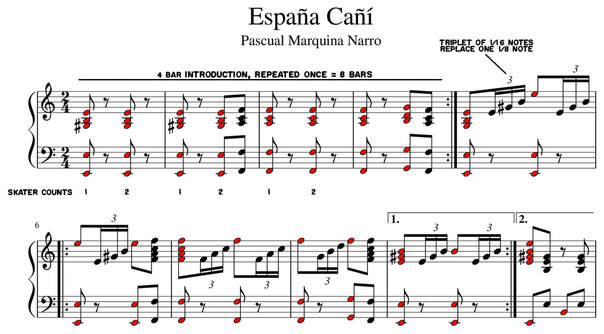