SKATE DANCE DIAGRAMS AND TOOLS
Foxtrot and Swing dances
Click to go to Alphabetical list
Foxtrot Origins:
sources include: Central Home, streetswing, about dance
At first it seems very clear that Harry Fox invented it in 1914, introducing it at the rooftop club of the New York Theatre's  Jardin de Dance. People referred to 'Fox's Trot' as he was doing trotting steps to Ragtime music. Eight years later, Charles Coll stated, "While I have heard many versions of its origin, have listened to many of its self-styled originators, I have credited Captain Vernon Castle (1887-1919) as its originator and preceptor." Fox may have had the lucky coincidence of being a dancer having the right name in the right place.
The Fox-trot is basically a Two-step, but done with a 'broken' instead of regular beat: Slow-Slow-Quick-Quick. It changed the landscape of social dances, with variations such as the Peabody, the Roseland and even the Lindy and the Hustle are derived from it. The fast Fox-trot (originally called a One Step) is now called the Quickstep (a name taken up by skating). The Collegiate [note skate dance of the same name done to Foxtrot music] Foxtrot, known as a more carefree and reckless version of the typical Foxtrot was also popular. Swing dances superseded the early Foxtrot era. The Foxtrot again became popular in the 1940’s among the children’s square dancing community. As the children grew older, this dance became a regular part of the adult country dancing repertoire.
An interesting side note.
Arthur Murray started his road to fame by being the first to ever have printed dance steps - they being of the Foxtrot - and selling them by mail order.
The Foxtrot (and the Waltz) are danced in a counter-clockwise direction around the floor - and skating is traditionally done in the same direction.

Music:
Foxtrots are usually in 4/4 , counted ONE-two-THREE-four, and footwork Slow-Quick-Quick or Slow-Slow-Quick-Quick. The three step pattern uses one 4 beat measure, the slow step taking 2 beats. The four step pattern takes 1-1/2 measures, and two of these four step patterns will take exactly 3 measures.  See Identifying Musical Rhythms for more help in identifying Foxtrots. For an existential treatment (not recommended, but interesting for inquiring minds) see "A Phrase-Structural Analysis of the Foxtrot with Transformational Rules".
Skate dance patterns determine the rhythm of the steps skated, and do not necessarily follow the off-skate footwork rhythms.

A modern Foxtrot rhythm is heard in "I Can't Help Falling in Love with You", first recorded by Elvis Presley, adapted from an earlier tune "Plaisir d'amour".
"Love me Tender" is another Presley song, adapted from the tune of "Aura Lee", That embodies the Foxtrot rhythm. 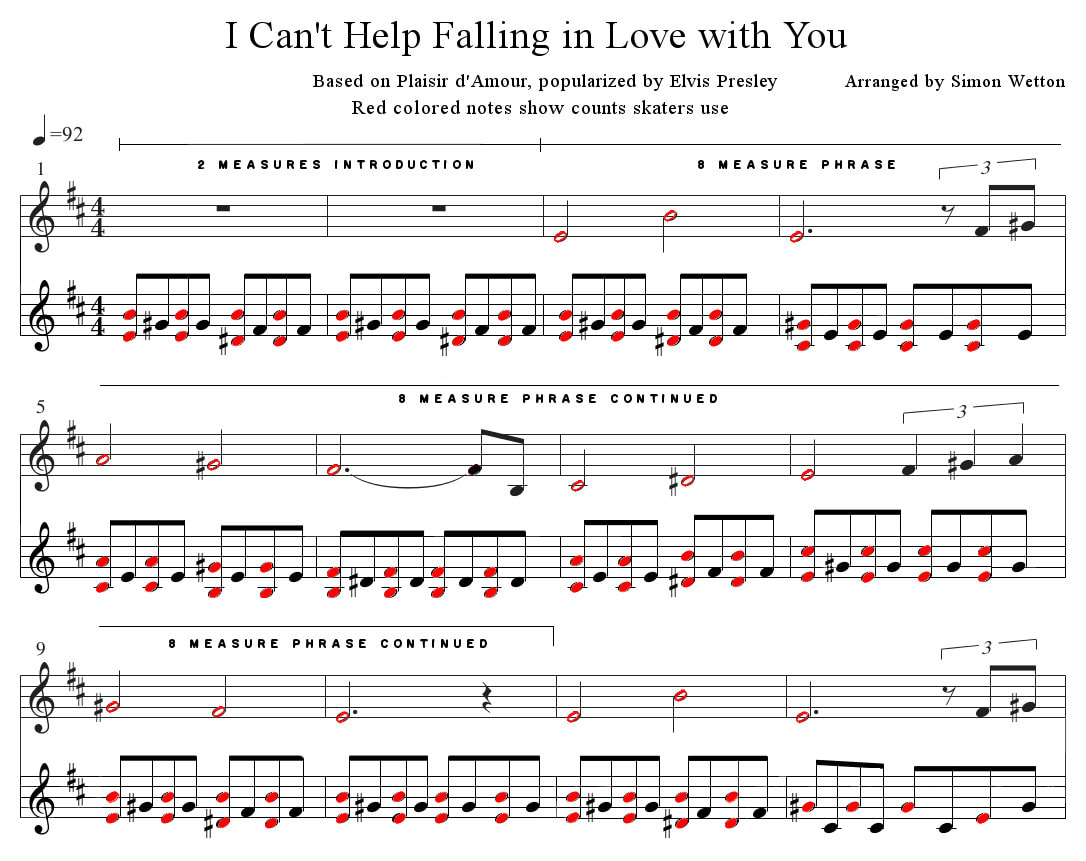 Swing Dance Origins
source: The Swing Dance Company
Swing history begins with the original Swing era in 1920s and 30s America, when Big Bands took over pop culture. Swing dance is a broad term to describe a variety of partner dances evolving from the 1920s to the present day.
An exciting evolution in jazz music broke out of New York's Harlem district in the late 1920s. With this new sound, a new dance was created, called the Lindy Hop. Lindy Hop developed from dancers mimicking other dance crazes of the time, including the Charleston and the Foxtrot.
The term 'lindy hop' was coined by dancers in New York. In 1927, pilot Charles Lindbergh made history by “hopping” over the Atlantic. Myth has it that one of the influential dancers of this time described his dance as the lindy hop inspired by Lindbergh’s feat.
Lindy hop was fast and intricate, to match the music being produced by the big bands. But over time the bands got smaller and the dancing evolved with the music. The term swing dancing can also includes solo jazz routines such as the Shim Sham, which is thought to have originated as a warm-up for tap dancers of the jazz era, and other dance styles that were crazes from the jazz era such as Balboa and Collegiate Shag [note skate dance of the same name].
With the new dance crazes of the 60's, partner dancing went out of fashion, until the 1980's when it re-emerged in French discotheques, and was labelled French jive or modern jive.

Even though some skate dance names use 'Swing', all specify Foxtrot as the music rhythm to be used.

Music:
source: Wikipedia
Swing uses a strong rhythm section of double bass and drums as the anchor for a lead section of brass instruments such as trumpets and trombones, woodwinds including saxophone and clarinets, and sometimes stringed instruments such as violin and guitar, medium to fast tempos, and a "lilting" swing time rhythm. The name swing came from the 'swing feel' where the emphasis is on the off–beat or weaker pulse in the music.
In the swing era, swing meant accented triplets (shuffle rhythm), suitable for dancing. With the development of bebop and later jazz styles independent of dancing, the term was used for far more general timings. Musicians in the jazz tradition prefer to transcribe swing music in a simple time signature and play it with an implicit swing. Musicians in the classical tradition prefer to make the swing explicit by using compound time (usually 6/8, 9/8, or 12/8) or triplets within a duple meter, and play it as written. However, most jazz musicians will dispute whether music played this way truly has a swing feel.
Powered by