SKATE DANCE DIAGRAMS AND TOOLS
Cha Cha
click here to go directly to list
Origins of the Cha Cha
from ﻿﻿Wikipedia﻿﻿:  Originally known as the Cha Cha Cha, became known as simply the Cha Cha. It was developed by Enrique Jorrin in Havana around 1953 with mambo roots and from the danzon, providing a somewhat simpler rhythm for club dancers.
Music:
The music is usually written in 4/4 time. Currently, ballroom counts the rhythm as two-three-chacha-cha while country/western & street latin counts it one-two-chachacha, with the main accent on the bold beat. Because syncopated beats are part of the esthetic, there is diversity as to technically how the rhythm is written, but according to:
Oxford dictionary of music
2 crotchets, 3 quavers, a quaver rest.  American translation - 2 quarter notes, 3 eight notes, an eighth rest
Grover American Dictionary of music
Danced in 4/4 time ... the ballroom cha-cha relies on compact steps and follows a rhythmic pattern of slow, slow, quick-quick, slow.
​
"Tea for Two", a Vincent Youmans tune utilizes Cha Cha rhythms.
"Somthin' Stupid" by Carson Parks and popularized by Frank & Nancy Sinatra is another.

​Chords indicate the accented beat. The rest in the Basic Rhythm makes the last 1/8 note feel like a 'slow'. 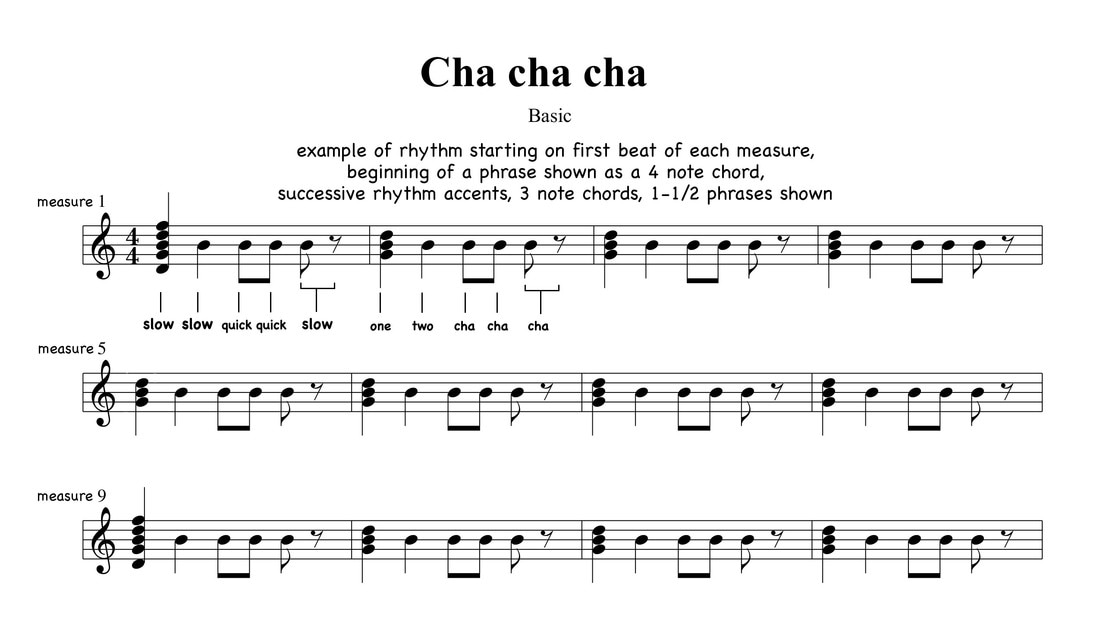