​Barn Dance(s)
The Barn Dance was originated in Scotland in the 1860's. The barn dance was also known as the "Pas de Quartre" (dance of four) and had the Quadrille and earlier the Contra (English) and Contredanse Anglais (French) as its ancestors. In form, these were square and line dances and many of their moves were re-invented in the 1920's and 1930's.
But generically, barn dances were held in rural areas on completion of a "barn rasin' " (building a barn), or other social events as weddings, holidays, etc.  Barn Dances consisted of Waltzes, Virginia Reels, Reels, Buck dancing and Breakdowns, Corn Husking Dances, Jigs, Schottische, Quadrilles and others drawn from the immigrant's heritage. In the US, they evolved and became known as Square Dances. A fun book is "The Folk Dance Book" for elementary school physical education - in 1903.  According to Western Square Dancing website, "[In the early 1900's in the US] A rowdy form of dancing called the "barn dance" set a precedent square dancers long have fought to overcome."

Even though some early skate dances were called 'Barn Dances', there wasn't a specific type of music used, although usually was set to 4/4 time.
Blues (also refer to Identifying musical rhythms)
The Blues arose among black slaves in the US as an antiphonal song form (call and response) in work songs, sorrow songs and spirituals, being somewhat less rhythmically complex than African music, but considerably more complex than its contemporary Western music. Slave drums and drumming was strictly prohibited in the early years of this country and instruments were by necessity homemade or improvised. It developed into rural and urban styles. The urban style became more formalized as other music forms were assimilated, and evolved into what we know as "The Blues" today.
Music
Key features are:In U.S. roller skating, sometime between 1988 and 1992, some blues dances were changed from 92 BPM to 88 BPM. And some later.
Apparently it took some years for most of them to be changed. This may lead to conflicting information as to 92 or 88 BPM for a particular Blues dance. 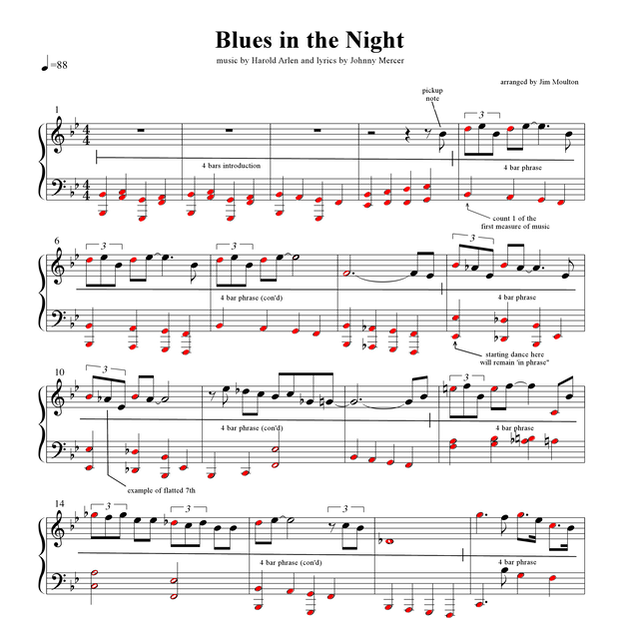 Boogie (also refer to Identifying musical rhythms)
The Boogie or Boogie Woogie originated in the 1920's with itinerant black blues pianists who played at "House Rent Party", "The Parlor Social," or "The Boogie" parties given by a tenant as a fund raiser for his rent.
Music
Key features of the Boogie are:
Understanding the Boogie rhythm is easier by layering from the bass line, adding the counter rhythm, and the melody on top as shown below. Red colored notes are the accented counts at 1 and 2 in each bar, although the skater may count 2 bars together as 1,2,3,4. Syncopation, accents off the major ones, are shown here by blue lines, and may not be at a regular times during each bar.
Even saying the full name of The "Boogie Woogie Bugle Boy of Company B" brings to mind the Boogie rhythm. It was written in 1941 as the US was preparing for WWII, for the military comedy movie "Buck Privates", sung by the Andrews Sisters.
A skateable rendition of another Boogie rhythm song, "Baby Elephant Walk" by Tim Laskey (with permission). 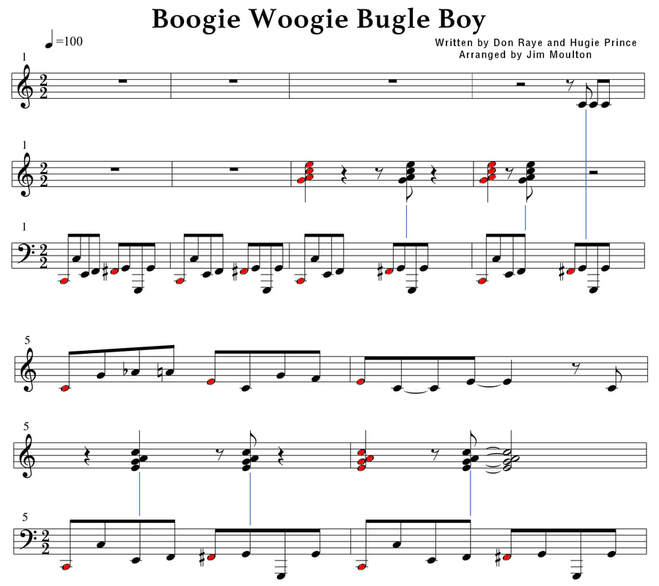